Today I have the pleasure of introducing my blog followers to a talented author, Marilyn Meredith aka F.M. Meredith. Marilyn is a fellow PSWA (Public Safety Writers Association) member. In fact, she’s the person who introduced me to this wonderful group of writers.

How did you become involved in PSWA, Marilyn?

When PSWA reorganized just over ten years ago I was on the committee and took on the job of conference chair. That first year twelve members attended. The following year attendance went up to sixteen. It continued to grow every year thereafter and has now reached approximately fifty.

Each year we have a great mix of attendees including people from all the public safety fields as well as mystery writers wanting to learn from the experts. Two years ago I handed over the job of conference chair to Michael A. Black, retired police detective and well-known mystery writer. I had the good fortune to meet him at several mystery conventions and knew he would be a good choice for the position. I’ve continued with my other job as newsletter editor for PSWA.

Through the years of my writing career, I’ve attended many writing and mystery conventions and conferences, but PSWA’s conference is my favorite. Not only is the conference fun, educational and amazing, but I’ve made lots of friends within the group and know I can turn to them any time for the research I need for my own books.

Besides having law enforcement officers in her family, Marilyn counts many others as friends. She teaches writing, loves to give presentations to writing and other groups, is a member of Mystery Writers of America and three chapters of Sisters in Crime, and is on the board of Public Safety Writers Association.

Marilyn Meredith is nearing the number of 40 published books. Besides being an author, she is a wife, mother, grandma and great-grandmother. Though the Rocky Bluff she writes about is fictional, she lived for over twenty-years in a similar small beach town.

Marilyn, where did the idea for A Crushing Death come from?

Another mystery author suggested the manner of death to me, something I’d never heard of before. After I did some research, ideas began flooding in as they often do.

The murder victim is a teacher who has been accused of improper actions toward one of his students. Is he guilty or not? It is up to the detectives investigating the case to find out, and in this particular instance, Detective Milligan’s wife, Stacey, helps find out the truth.

A religious cult has an important part in this tale—and no, I’ve never belonged to one or known anyone who has, though I’ve certainly read about many.

Another plot thread has to do with a big threat to the new police chief and how her fellow police officers react to it.

Because I introduced Doug Milligan’s daughter in the last book, Violent Departures, I wanted her to have a part in this latest book.

I’ve always felt that plotting a book is much like weaving—bringing different threads together into a colorful and believable story. 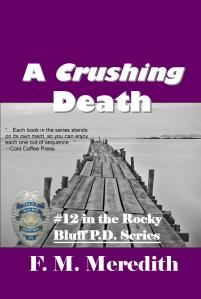 Here is the blurb for A Crushing Death

A dead body is found under a pile of rocks beneath a condemned pier, a teacher is accused of molesting a student, the new police chief is threatened by someone she once arrested for attacking women, and Detective Milligan’s teenage daughter has a big problem.

Thank you, and thanks for having me on your blog. I wanted to mention that I’m having a contest. The person who comments on the most blogs during this tour can have a character named after them in the next Rocky Bluff P.D. mystery. Tomorrow you can find me here: http://willkillforastory.blogspot.com/

24 thoughts on “The Marvelous Marilyn”

About me About This Site FBI Mental Health Profiling Serial Killers Sociopath, Psychopath and the Anti-Social Personality The History of Criminal Profiling Traveling Travels Uncategorized Writing

79,803 spam blocked by Akismet
Ramblings of a 50 something year old

The random thoughts of a Newfoundland author

A Writer’s Guide to Words:

my journey thru M.E.

The stepping stones of life with M.E./C.F.S

Ramblings of an Eclectic Mind

Inside the mind of MissMap

the art of Angel Laveaux

SCRIBE OF LIFE, DEATH, LOVE & CRIME IN THE COLORADO MOUNTAINS.

My journey of healing from psychological abuse

psychological abuse is very prevalent in our day and age, though few know how to recognize it